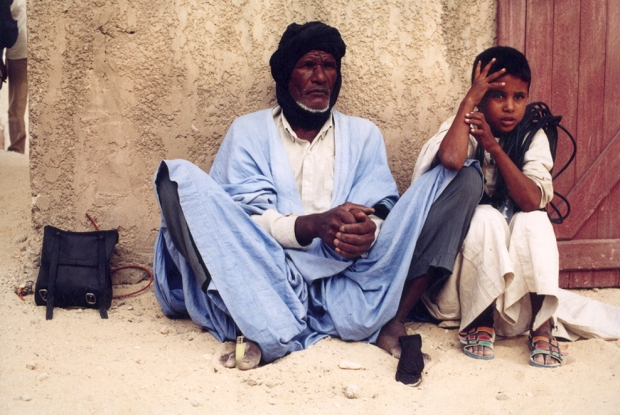 Having grown up in a city whose residents often seemed to be unified in wanting to be elsewhere, I can perhaps identify with some of the longing that permeates Waiting for Happiness (Heremakono, 2002). It is not merely a desire to leave – many people feel a strong connection to their birthplace long after they’ve left for good – but a deep restlessness that the place itself seems to provoke. It is a powerful sense that one has not yet found one’s home.

Situated at the northernmost tip of Mauritania’s west coast, Nouadhibou may be one such place for many of its residents; a point of transit, not only for those wishing to try their luck at entering Europe via Morocco, but also for those entering the country from elsewhere. This is the setting and central thesis of Abderrahmane Sissako’s Waiting for Happiness, the only one of his four feature films to date shot in his homeland.

Sissako, a regular Cannes Film Festival competitor, is perhaps the most famous African director working today, and it’s not hard to see why. Waiting for Happiness is a sometimes moving, often gently funny and always wonderfully shot film, full of gently detached observation: a Chinese man sings karaoke in a near-empty bar; a girl learns to sing while her mother plays the ardin; a young boy chances upon a pornographic sketch book. Its characters, for the most part, are either trying to leave or else in various stages of coming to terms with the fact that they will never be able to. Transition here is not merely geographical but interior, as its three main protagonists prepare respectively for puberty, adulthood and death.

Waiting for Happiness isn’t, it must be said, always the most challenging work in terms of narrative or form; although, to be fair, intersecting character arcs and languorous pace were perhaps a little less of an arthouse cliché in 2002 than they are today. Regardless, Sissako’s film is always beguiling, with a (given Mauritania’s religious conservatism, somewhat surprising) undercurrent of subtle sexuality carrying right through to its final shot of some rather suggestive sand dunes. After that, a brief dedication: à ma mère.