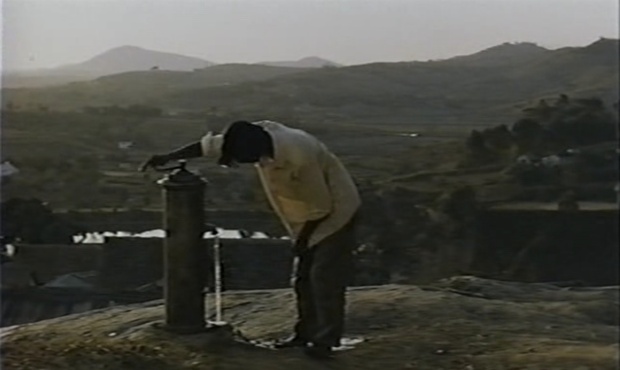 In the child’s dreams, the sound of the tide transforms into one of stampeding hooves in a cattle pen; a memory of a formative trauma that has left him crippled. This is the first post-credits sequence of Raymond Rajaonarivelo’s When the Stars Meet the Sea (Quand les étoiles rencontrent la mer, 1996), an at-times uneven but often impressive film that marks my first encounter with the cinema of Madagascar.

As with many notable African films, When the Stars Meet the Sea came into being as a French co-production. Its plot, however – co-written by frequent Jacques Rivette collaborator Suzanne Schiffman – seems to owe more to the legends of Ancient Greece; its narrative of fate and unwanted supernatural power bookended by two acts of attempted filicide.

Kapila, the protagonist, is permanently disabled; the victim of a local custom that any infant born during a solar eclipse be trampled to death by livestock. He is rescued by a teenage girl who flees with him to the city, where – as an adult – he lives in poverty selling discarded bottles on the streets of Antananarivo. He befriends a young street urchin, but a tragic incident leads him to return to the village of his birth, where he becomes an unwilling angel of death.

The strengths of When the Stars Meet the Sea lie in its early urban sequences – scenes of cockfighting, street vending and railyards like something out of Dickens’ London – and the sparse, beautiful central Madagascan landscapes that fill the film’s second act. The plot, however, seems to lose its way at times, most notably in the way the death of a major character is treated; while the ending, perhaps partially as a result of budgetary constraints, feels rushed and anticlimactic. There is an engrossing quality, though, to the film’s transposition of Ancient Greek archetypes to such a different milieu – where, for those with divine gifts, the world becomes the room from Andrei Tarkovsky’s Stalker; a place where one only ever gets what one truly wants, and compassionate intercessions can be washed away by the most fleeting wish for retribution.