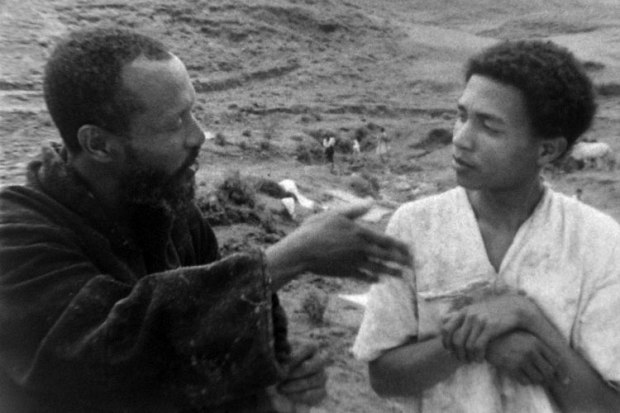 The cinema of Sub-Saharan Africa is dominated by the continent’s Francophone west; a region that has benefited from a strong film culture and a long history of French institutional funding. Look across to the east and south (South Africa itself excluded), and the offerings become sparse to non-existent. And yet, the best African film I have seen emerges not from Mali or Senegal, but Ethiopia: Haile Gerima’s 1976 masterpiece Harvest: 3000 Years (Mirt Sost Shi Amit).

Although a giant of African cinema, Gerima made his first films in the US, radical works about the struggle of African-Americans against an oppressive system. Harvest: 3000 Years was the first film he made in his native Ethiopia; a slow-burning saga of post-colonial exploitation and rebellion that is at once free-flowing and carefully controlled.

Amongst atmospheric, documentary-like early sequences of cattle driving and food preparation, a narrative of power imbalance emerges: that of a rich land-owner and his serfs, workers who till his land for little pay and passively endure his vituperation. The only challenge to his authority comes from a local peasant who yells insults from the road, claiming to have been wrongfully dispossessed of his land.

The trajectory in this Marxist parable inches ever-closer to revolution, but it is telling that the most explicit moment of group resistance occurs in a dream sequence – not a dream of the oppressed, but of the land-owner himself; his subconscious perfectly aware that the inequality from which he profits cannot last.

Happily, there is a great deal going on in Harvest: 3000 Years that doesn’t directly serve its central narrative. A few moments of startling audiovisual experimentation aside, Gerima films the everyday life of the villagers in a style that recalls that of De Sica or early Pasolini: children playing idly; stories told over dinner; the mundane repetition of farm work. The story he tells is only ever secondary to the world he immerses viewers in. Times of oppression may come and go, but – as the film’s title suggests – some things remain constant: the necessities of life must be fulfilled, and the harvest must be gathered.